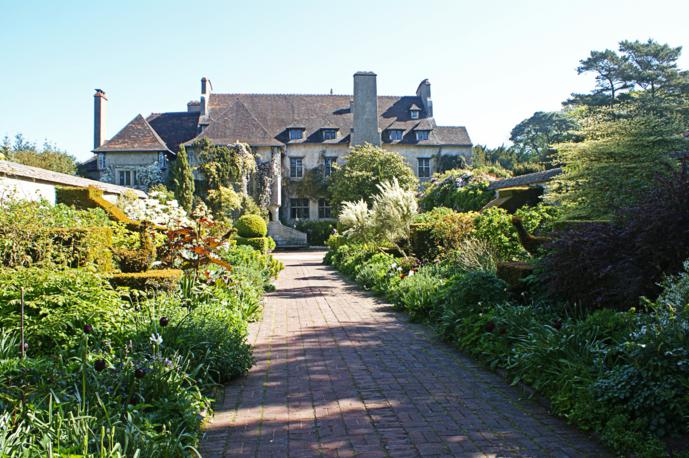 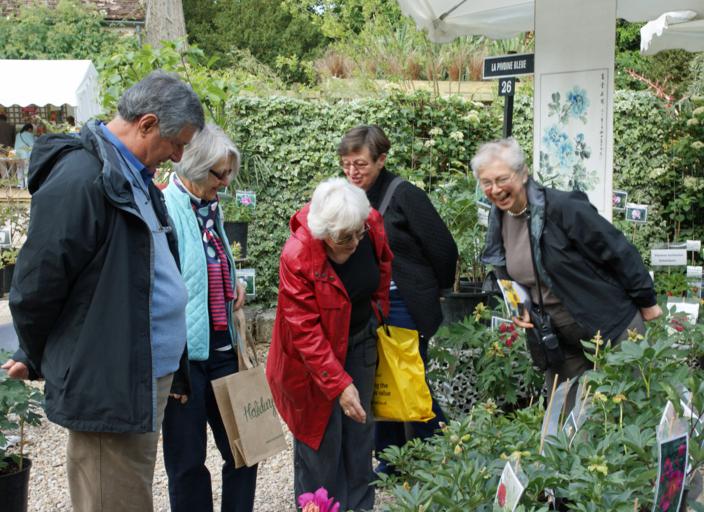 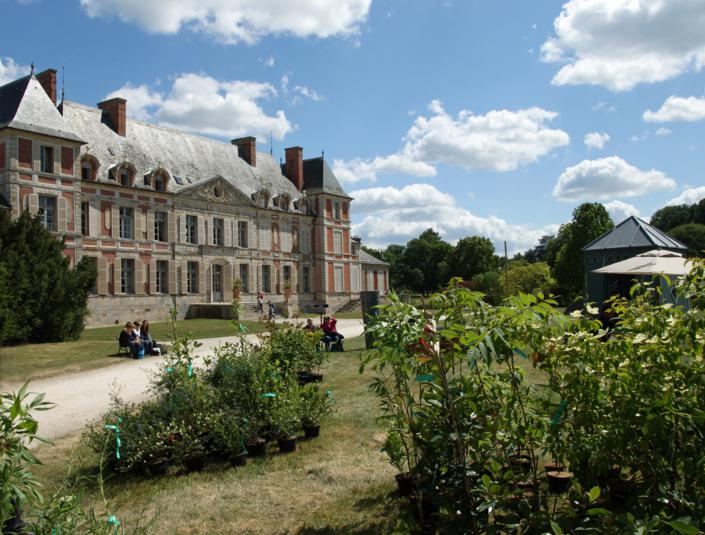 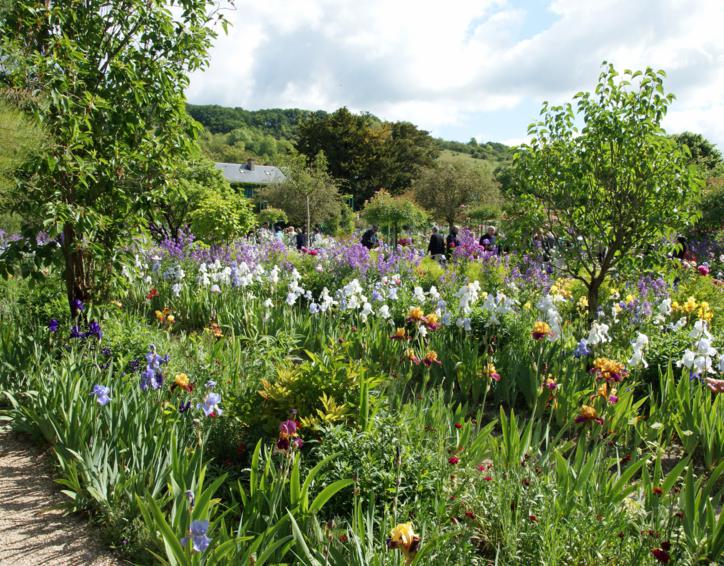 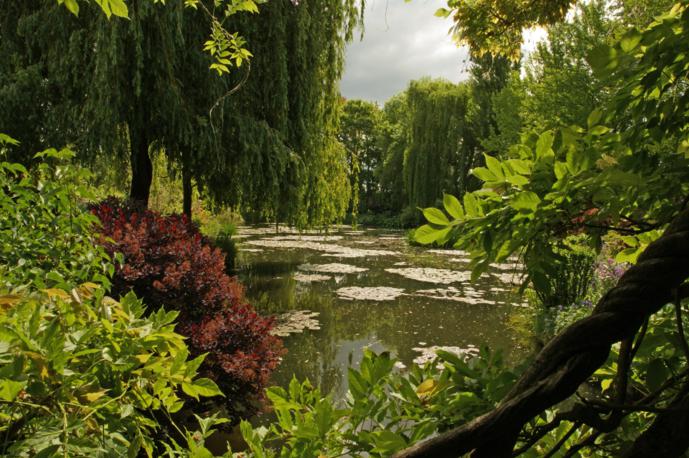 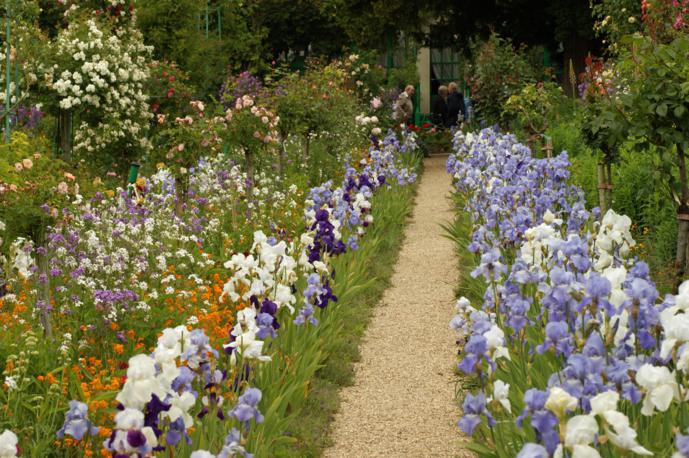 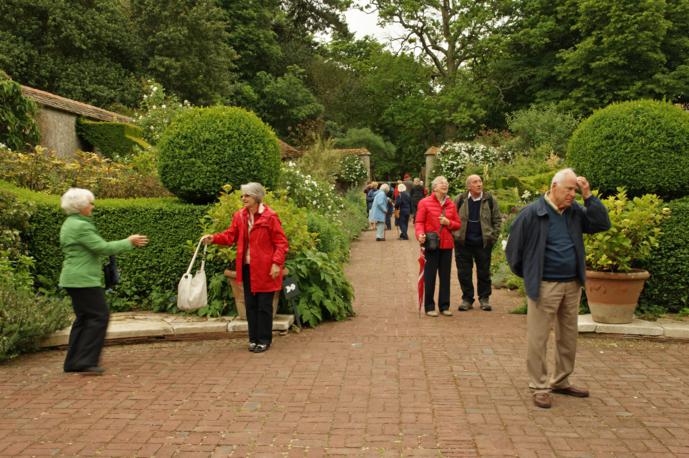 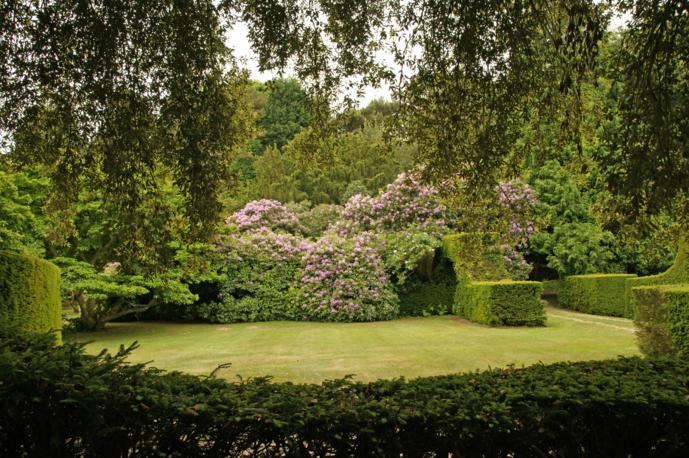 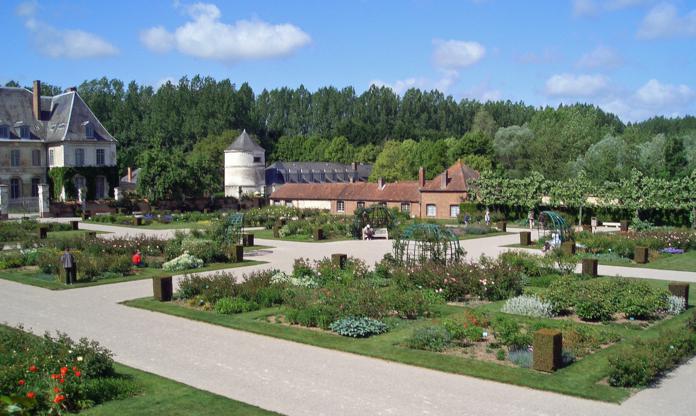 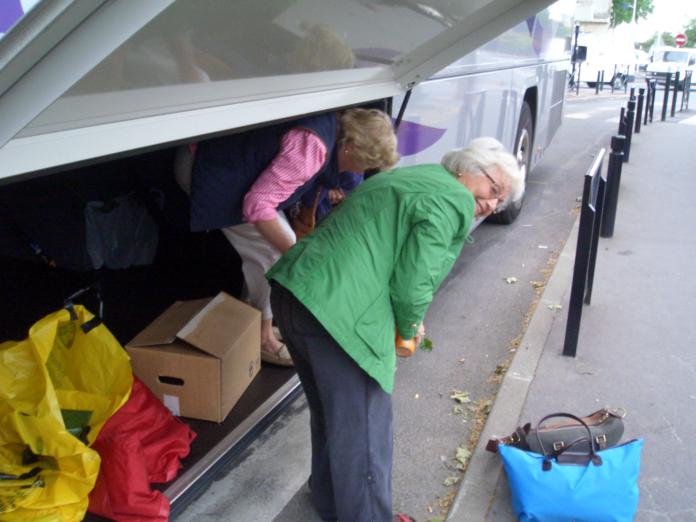 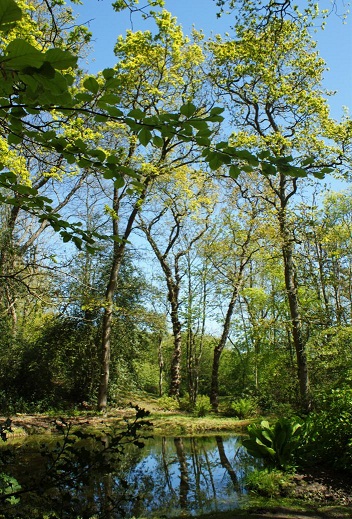 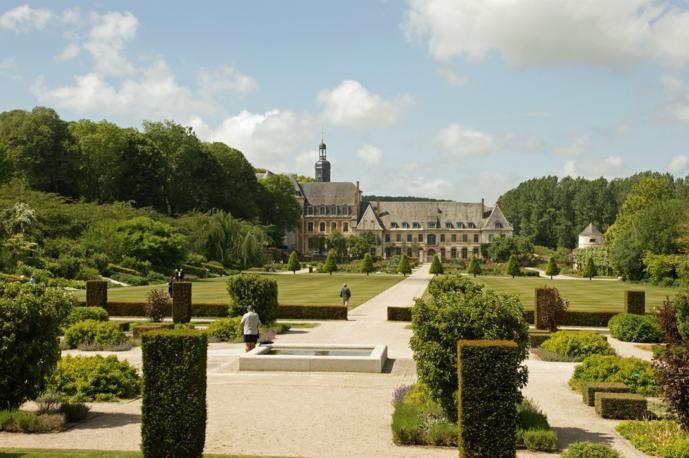 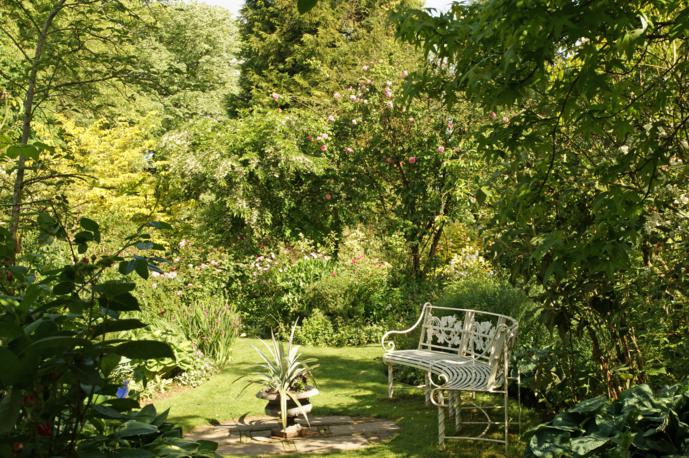 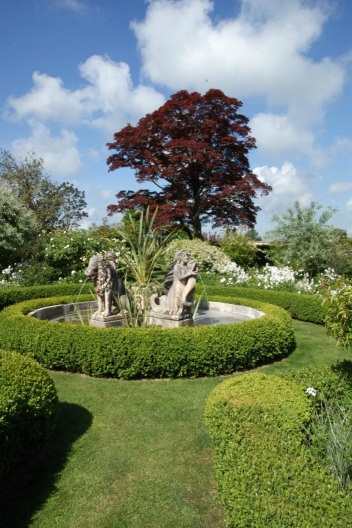 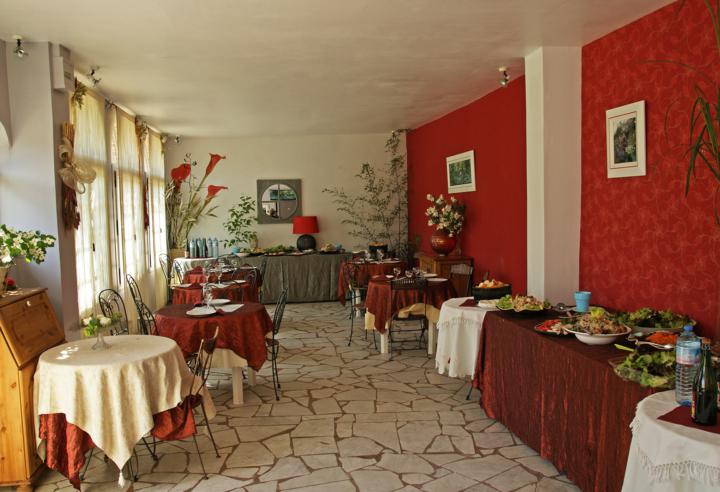 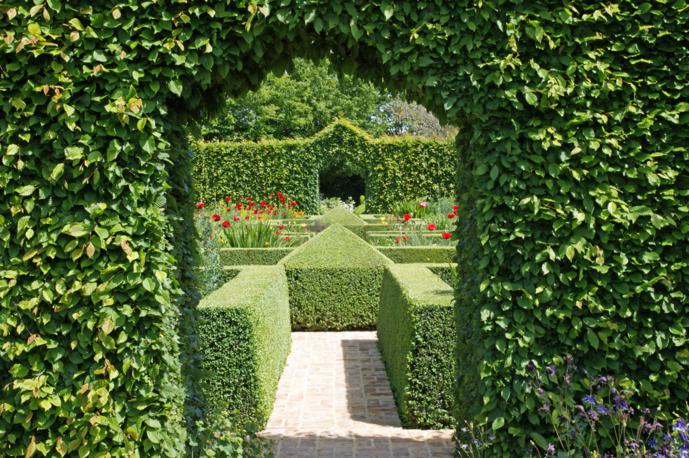 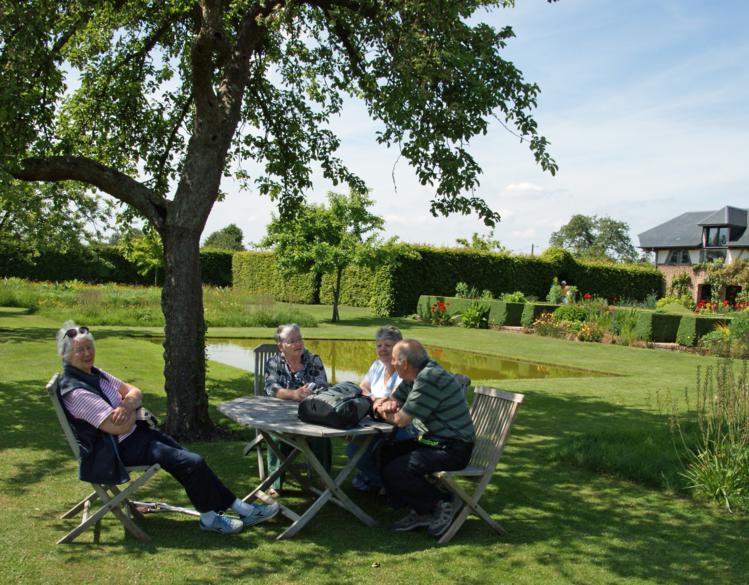 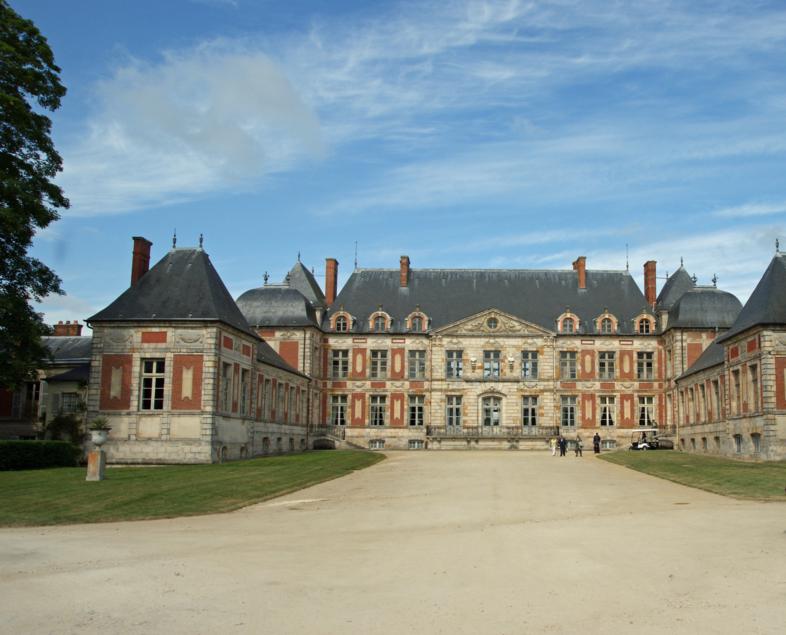 Everyone arrived at their pickup points early and with precision timing and organization we crossed the channel half an hour earlier than expected. A problem with two passports being left behind was quickly overcome and we were on our way to France. We arrived at Jardin de Valloires and facing us was the magnificent Abbey. What a treat was in store for us. The garden in front of the Abbey was very flat very formal beds with box hedging. So many roses, paeonies and irises were in bloom. All seemed to be colour co-ordinated in white, blues and yellows. To the right of the Abbey was a walk of pleached Tilia Tomentosa which enhanced the formal setting.

Rising up to the right and left of the formal garden looked like woodland settings until you wandered into them. They were more formally informal but still with colour coordination. There were sections of golden leaved trees, blossoming trees and a section of silver grey foliage. Wildlife was in abundance and there was a very peaceful atmosphere to the whole garden. We left the garden and travelling along the country roads we saw some lovely gardens and quaint buildings. We happily arrived at our hotel for the night. There we met some cyclists on a charity run from London to Paris, and I wondered if we could have seen even more of the countryside if we’d travelled by bike, perhaps?

After watching the huge group of cyclists leaving the hotel near Abbeville we travelled to the Jardins d’Angelique near Montmain. Right by the entrance were the toilets housed in two quirky, attractive Wendy houses. Behind the lovely manor house the formal garden was full of old roses, paeonies, hydrangeas with beds radiating out from a circular fountain. The less formal garden was filled with every sort of perennial and plenty of shrubs and small trees for structure. My favourites were the Physocarpus ‘Diabalo’ and a very delicate small tree – Pterostyrax hispida. There were plenty of seats in very typically French wirework and in some of the more shaded parts flower colours were picked out with matching painted woodwork.

The delicious buffet lunch and local cider was all the better for being served in such an attractively arranged room.

The whole place was quiet and restful but with an element of fun – the walkway between the front and back of the house was decorated with watering cans and handmade concrete leaf dishes. Definitely high up my list of favourite gardens.

A short run in the coach took us to the Jardin Plume – a complete contrast. Most of us gravitated straight to the nursery to investigate the large variety of interesting plants for sale. The garden itself was adventurously planted with lots of surprises in the garden rooms. There were formally shaped areas in front of the house filled with wild plants in sharp contrast to the traditional boxed areas next to the house. The garden takes its name from the many tall grasses gently blowing in the breeze. A garden to be visited in more than one season!

We arrived tired but happy in the hotel in Nanterre on the outskirts of Paris ready for the main event the next day ‘Les Journees des Plantes’.

We had to be dragged away from the fascinating market in front of the hotel to be treated to the view of plants being watered by Viv inside the luggage locker under the coach. Pete is threatening to put the photographic evidence on the website! (And I have.)

Through the main entrance to the show we were overwhelmed by the amount of stalls selling a profusion of plants for all tastes, of high quality. The paeonies and roses were spectacular.

Having spent all (and more) of our plant money around 280 plant stalls some of us found a quiet spot by the lake surrounded by yellow flag irises and stately trees with the chateau on our left.

Back at the hotel we had an enjoyable meal and a quiet drink. One of the nicest aspects of these trips is the chance to chat over the day’s events with other members of the group.

Having viewed many of Monet’s paintings of his garden I wondered whether the ‘real thing’ would live up to my expectations. It certainly did! The tranquil water garden shaded by weeping willows with the iconic green Japanese bridge festooned with wisteria, the lily pads with the flowers just beginning to open was a delight to behold. In Monet’s time his team of eight gardeners would wipe the lily pads daily, remove leaves and scoop out algae. Monet even paid workers to tar the road next door so that vehicles didn’t throw up dust to settle on the water!

In the formal garden, directly below Monet’s house, Paeonia lactiflora cultivars relish the sunny site and limy soil along with irises of every hue, mauve and white sweet rocket, poppies and roses in glorious combination. It is good to reflect that what began as a few flowers for cutting for Monet to paint inside on rainy days became the five acre obsession we see today. Monet once declared “I am no good at anything but painting and gardening”.

After enjoying the beauty of Monet’s garden we made our way to Rouen and the Mercure Hotel. Having discovered tea/coffee-making facilities in our rooms (great excitement!) we took full advantage of it before venturing into Rouen to visit all the tourist spots.

At the delicious meal in the evening votes of thanks were given to Roger, Penny and Mick (the coach driver) for all their hard work in organising such an enjoyable trip.

We left our fantastic hotel in Rouen where we had been truly spoilt with the tea making facilities in our room and mouth-watering food. There were grey skies above us and it seemed a bit cooler – perhaps because we were coming north towards England and hopefully wet weather.

We arrived at Jardin de Moutiers and met more cyclists – these were motorised this time. The garden was clearly marked with arrows and on this occasion it was best to follow them so as not to miss anything.
First we went into the formal gardens – Gertrude Jekyll was mentioned here. It had a white theme and we particularly liked the topiary birds in the boxed sections. The roses were full of buds but not out yet.

Around the back of the chateau the garden was still formally set out but without the box. The roses in this area were in bloom being more protected by the walls. The paeonies and iris were such a show of colour. We then followed the signs for the park.

How glad we were that we went on that journey. In all it was a good one hours walk including our stops to look at the amazing trees and rhododendrons in full colour. This part of the garden was not on the flat! Its stony path leads you in different directions as well as up and down. Winding through some of the trees in shadowy places it was easy to let your imagination run riot. Was that an elf or a fairy running between the lovely shaped stems or trunks of the large rhododendrons?

At the bottom of the valley a bog garden nestled, full of astilbes and enormous skunk cabbage – very smelly when disturbed. Was that a crocodile under there?

Up yet another winding path and we saw the sea – we didn’t realise it was so close! From another vantage point we could see the spire of a church through the trees. We continued through the azaleas in such an array of colours, returning to the coach and our journey home.

Thank you for such a fantastic holiday!